“Mr. Lawyer. I want you to defend me.”
“What’s the charge?”
“I was arrested for issuing fake checks.”
“I’ll defend you, but only if you pay me in cash.” 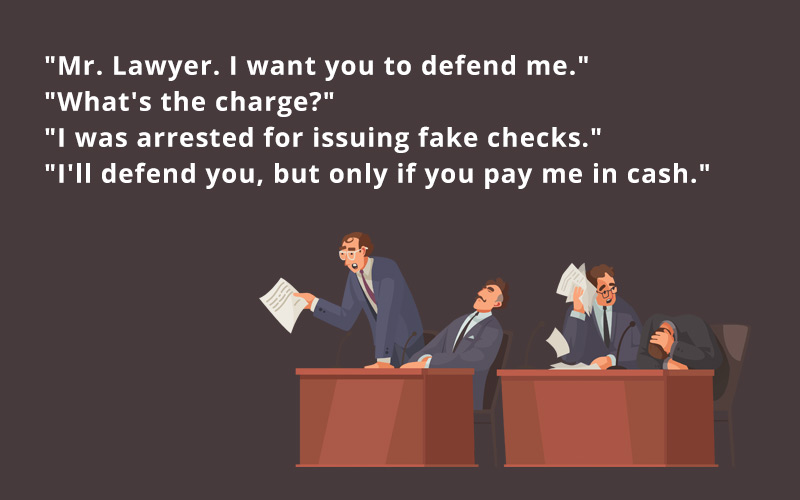 “Mr. Lawyer. I want you to defend me.”
“What’s the charge?”
“I was arrested for issuing fake checks.”
“I’ll defend you, but only if you pay me in cash.”

The Teacher, the Thief & the Lawyer

A teacher, a thief and a lawyer all die in the same freak accident. So when they reach the pearly gates, St. Peter tells them that, unfortunately, heaven is overcrowded, so they each have to answer a question correctly for admission.
The teacher is first, and St. Peter asks, “Name the famous ship that was sunk by an iceberg?” “Phew, that one’s easy,” says the teacher, “The Titanic.” “Alright,” said St.Peter, “you may pass.”
Then the thief got his question: “How many died on the Titanic?” The thief replied, “That’s a toughy, but fortunately I just saw the movie. The answer is 1500 people.” And so he passed through. Last, St. Peter gave the lawyer his question: “Name them.”

What do you call Satan and a lawyer?

What do you call Satan and a lawyer?

Two lawyers, Jon and Amanpreet, head out for their usual 9 holes of golf. Jon offers Amanpreet a $50 bet. Amanpreet agrees and they’re off. They shoot a great game. After the 8th hole, Amanpreet is ahead by one stroke, but cuts his ball into the rough on the 9th.

”Help me find my ball. Look over there,” he says to Jon. After a few minutes, neither has any luck. Since a lost ball carries a four point penalty, Amanpreet secretly pulls a ball from his pocket and tosses it to the ground. ”I’ve found my ball!” he announces.

”After all of the years we’ve been partners and playing together,” Jon says, “you’d cheat me out of a lousy 50 bucks?”

”What do you mean, cheat? I found my ball sitting right there!”

”And you’re a liar, too!” Jon says. ”I’ll have you know I’ve been STANDING on your ball for the last five minutes!”

A lawyer defending a man accused of burglary tried this creative defense:

“My client merely inserted his arm into the window and removed a few trifling articles. His arm is not himself, and I fail to see how you can punish the whole individual for an offense committed by his limb.”

“Well put,” the judge replied. “Using your logic, I sentence the defendant’s arm to one year’s imprisonment. He can accompany it or not, as he chooses.”

The defendant smiled. And, with his lawyer’s assistance, he detached his artificial limb, laid it on the bench and walked out.

We use cookies on our website to give you the most relevant experience by remembering your preferences and repeat visits. By clicking “Accept All”, you consent to the use of ALL the cookies. However, you may visit "Cookie Settings" to provide a controlled consent.
Cookie SettingsAccept All
Manage consent

This website uses cookies to improve your experience while you navigate through the website. Out of these, the cookies that are categorized as necessary are stored on your browser as they are essential for the working of basic functionalities of the website. We also use third-party cookies that help us analyze and understand how you use this website. These cookies will be stored in your browser only with your consent. You also have the option to opt-out of these cookies. But opting out of some of these cookies may affect your browsing experience.
Necessary Always Enabled
Necessary cookies are absolutely essential for the website to function properly. These cookies ensure basic functionalities and security features of the website, anonymously.
Functional
Functional cookies help to perform certain functionalities like sharing the content of the website on social media platforms, collect feedbacks, and other third-party features.
Performance
Performance cookies are used to understand and analyze the key performance indexes of the website which helps in delivering a better user experience for the visitors.
Analytics
Analytical cookies are used to understand how visitors interact with the website. These cookies help provide information on metrics the number of visitors, bounce rate, traffic source, etc.
Advertisement
Advertisement cookies are used to provide visitors with relevant ads and marketing campaigns. These cookies track visitors across websites and collect information to provide customized ads.
Others
Other uncategorized cookies are those that are being analyzed and have not been classified into a category as yet.
SAVE & ACCEPT